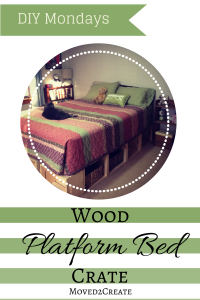 For this first DIY, I decided to feature an idea I had for creating a storage platform for my bed. Though I didn’t see this idea on Pinterest, there were many other similar ideas, and as for many things that I find on Pinterest, I didn’t know I wanted this until I saw it.

The first idea that I saw was this Farmhouse Storage Bed by Birds and Soap, Soap and Birds. I really liked the idea of having some storage space under the bed, especially since I was becoming tired of the bed frame that I currently had. There are so many great idea for this storage platform on Pinterest that I didn’t exactly know where to start. There were several people who used two bookcases from IKEA. The closest IKEA is 5 hours away and it costs a fortune to have anything shipped from them, so I went online in search of something else that would do the trick. I was unsuccessful at finding anything for a price that I could live with. For about four months I battled with what to do, and even considered trying to build something myself, but I am not good with tools so I wanted an easy idea. I had pretty much given up hope when I happened to be browsing Pinterest – once again – and saw that someone had created a coffee table with some wood crates.

This got me thinking again. Could I put together several crates that would support a queen-size mattress? I did a search and couldn’t find anyone else who had used crates for this purpose, but I decided to go to Home Depot and check out what they had for crates. I really wanted to see how well put together they were. Though they were only stapled together, they felt like they would be strong enough. Fortunately for me, they were on sale! I had measured it all out and determined that with these 18″ long crates, I would need 4 for each side and 3 for the end. With a huge selection to choose from, I was able to pick the best crates and make sure they were all the same size.

I didn’t stain or paint the crates, because honestly I was just too excited to put it together to think about that. They weren’t really rough either, so I didn’t even have to sand them down. There were many people who used crates to create bookshelves, and they secured the crates to each other with screws. I wasn’t too worried about the crates moving, so I did not secure them. With the 11 crates ready to go, I measured out where the crates would need to go for the mattresses to fit on top and so that it would be centered against the wall. With the support of the box spring, I thought I wouldn’t need any additional support, however, I did end up putting one of the crates in the middle of the open space for a little extra support (ended up buying an additional crate at Walmart to fill the gap at the end of the bed). 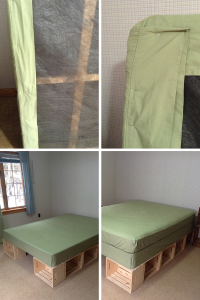 Once the crates were all laid out, It was time to get the mattresses ready to go. I wanted to make sure that the box spring stayed covered with a sheet, and I didn’t want to have to worry about tucking it in all the time. And since I didn’t have two fitted sheets that were the same color, I used the top sheet and stapled it to the bottom of the box spring (trying to make neat corners). It came out great, and when I put the box spring on the boxes, it was a perfect fit. Because I was doing this by myself, the crates shifted a little as I put the box spring on them, but it was pretty easy to line them back up. The top mattress got a fitted sheet, secured with some sheet straps (seriously the best creation ever) and got stacked next.

With the crates on their side and the two mattresses on top, the bed measured just under 30″ tall, which is the perfect hight. 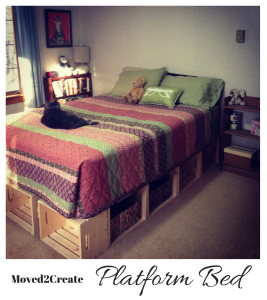 As I was making the bed, I did notice that I had to be very careful not to step on the part of the crate that was on the floor. But other than that, I have had no problem with it feeling secure. I am not sure what I am going to put in all the new storage space I find myself with! I was able to find a couple baskets at TJ Maxx that fit into the crates, though next time I go shopping for some I will be bringing my little measuring tape. I guess I am so used to ordering things online where you can find all of the dimensions pretty easily. But when you are out in an actual store, they don’t always tell you the dimensions.

So, this is the final product! I am very happy with it. The cat seems to like it too. Without a headboard, the wall looks very bare, so that is a project that will be coming up soon – maybe that one will include some tools. New curtains are needed as well, so I see plenty of other projects in sight!

Measuring to make sure they are far enough apart

Decided to stick a crate in the middle for right now for added support.

Stapled a top sheet to the box spring.

Made some nice corners.